Diary of a silent meditation retreat 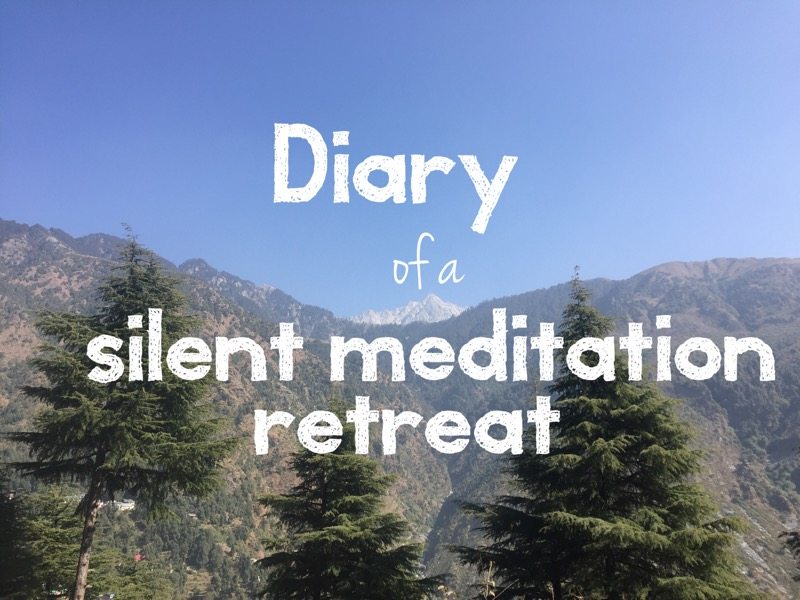 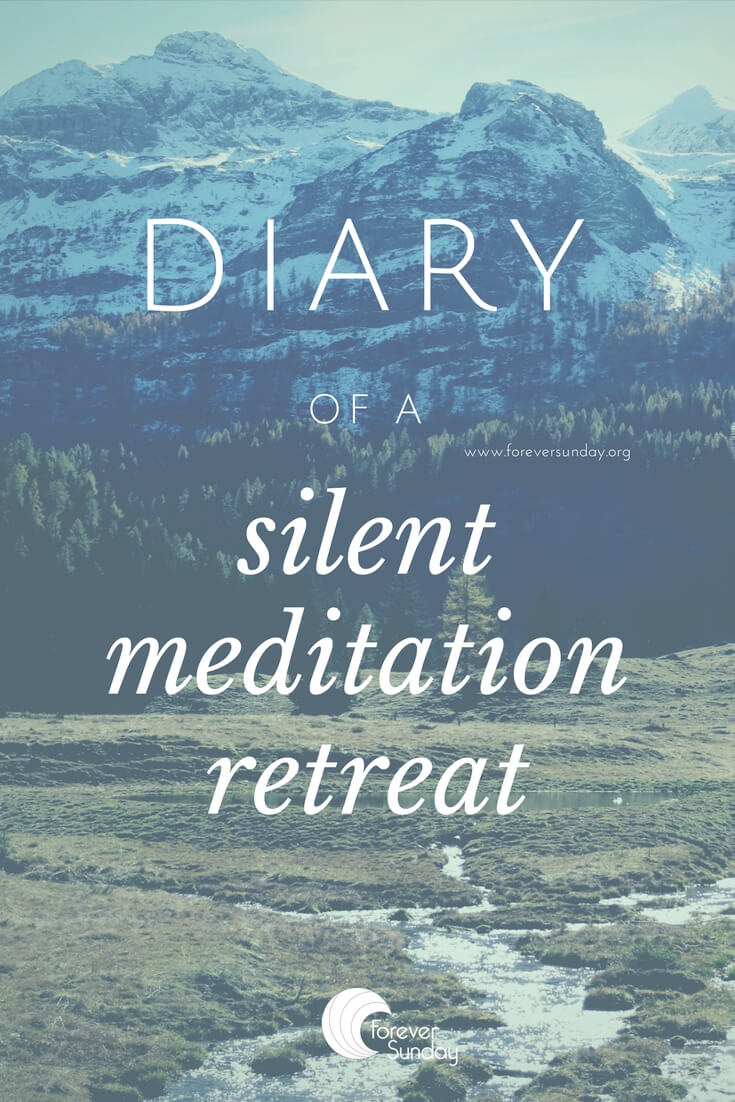 A couple of weeks ago I did a 9 day silent meditation retreat at Tushita Meditation Centre, Dharamsala. I’ve been wanting to do one since forever… Here I am finally sharing with you my thoughts and experiences.

1pm. Check-in time. Oh boy. It looks like it’s going to be a big group. I’m thrilled there’s still a double room available as I don’t really like being in big groups without the possibility of “retreating”- which is what I am here for, after all.

My roommate’s name is Paloma. Both her name and mine mean “peace” so we decide it’s a good omen and we will be friends… Silence is only starting after dinner, so we both pour out our life stories now it’s still allowed! I am happy that everything seems very well organised (as a former marketing manager I still appreciate these things) and I settle into my room. The challenge of today is to get the square duvet into the rectangular duvet cover. Who would DO such a thing?? Only in India. I can be such a left brainer (if you believe in these things).

Before coming to Tushita I was staying a while in a guesthouse halfway down the mountain, between two villages. The only way to get there was to follow a rocky path so I had no choice but to go back up the same way with my luggage, as Tushita is at the top. At a certain moment I slipped, and to steady myself to avoid falling 2m down into the void I grabbed the only thing that was available: a handful of nettles.

While meditating and sitting for a while, your mind will draw attention to where there is discomfort – usually your back or your knees or tight hips (or all together). So this time was different, as I had needles and pins in my hand for 3 days. It’s an interesting exercise to try to ignore it, or to breathe into it and make it disappear (most of the time it didn’t). (I am usually equally successful with mosquito bites).

We meditate about 3 hours a day. Our day starts at 6.30am and finishes at 8.30pm. We have lectures about Buddhism and a yoga class before lunch. I can feel it’s been a while that I had to concentrate for such an extended period of time!

It’s not as hard as I thought it would be. We enter the meditation hall (gompa) in silence. We eat in silence. Between classes we sit in silence and read. We are fully silent the whole day, except for one hour where we have a group discussion in small groups to discuss the teachings. Dharma, karma, rebirth, suffering, mind, ego. It helps to grasp these concepts, but after that hour it’s hard to settle back into silence – although that feeling lasts only 15 minutes and then I’m happy again not to talk. With my roommate I exchange the occasional practical sentence, like “Can I use your toothpaste?”, or “I let the giant spider out of the room”. We don’t have any real conversations.

Being silent frees up so much time to read and rest. Especially eating is really a social thing in the West, but now when you are finished you get up and leave the table. I am going to finish reading a few books while here!

I notice that a lot of the conversation I usually make is about things I notice: this weird insect/his face/the moon/the colour of… (did anyone at Tushita see the branch of the tree that grows through the trunk of the other tree? Joined together forever!). It’s a way of connecting, to check if other people see the details I see. Now I can’t do this. I want to say something, look at the person I want to say it to, remember the silence, and I let it go. It doesn’t matter, it’s just chatter anyway.

Day 4: about the pain

Three hours of meditation a day is a lot but it’s not even close to a vipassana retreat which is much more strict. By now there is no meditation posture that doesn’t hurt after 5 minutes. My hip bones feel like needles poking through my skin. I see people getting up and walking straight away after an hour of meditation, and I need 5 minutes just to get the blood flowing in my legs again. Ah, the pain! Sometimes I don’t hear anything the teacher is saying as in my mind there is only shouting: “Get OUT of this posture!”, “Move NOW”. My mind is offering me rewards if I would only move. (“THEN I’ll be quiet.”) But of course it doesn’t work like that.

I am also starting to recognise the other tricks my mind plays on me do distract me. It is the nature of the mind to oppose any changes, even if they are good for you. So it places an object in front of you that you really like or dislike and it is so hard not to grab it and run with it. It’s mine! The most effective distractions for me are thoughts about my loved ones and often I am thinking about how I can teach what I learned in my head. Slowly slowly I am learning to control these thoughts, look at them from a distance. It’s just temporary…

You would think 3 hours meditation a day is enough, but it’s sort of addictive. I can hardly call my meditations “successful” as it’s hard to undo decades of letting the monkey mind be, but I notice that even in between sessions or before sunrise, I start to do a bit “extra”.

During our stay everyone has a task to fulfill. A daily duty of about 15 minutes for the benefit of the community. Some people have to do the dishes, others are cleaning the toilets. There is also someone who is cutting the grass with a (blunt) pair of scissors. I was assigned cleaning the tables and floor after dinner. The system works in general as there are so many people, although not everyone takes their job seriously. My  cleaning partner didn’t show up most of the time and when he did, he swiped the floor in under 5 minutes. I wonder what happens in their heads when people don’t show up or do only a half job but I decide it’s too unimportant to complain.

Every day we have a yoga class to stretch our weary limbs before lunch. The classes are  taught by some of the other students. Today one of the teachers asked if I could take over some of his classes as he wanted to have some days of complete silence, so I started teaching. Biggest group ever! It feels nice to share this with these students.

Today is a special day. There was a public talk by two young lamas. They are recognised by the Dalai Lama as reincarnations of important lamas who lived before. They talked about their struggle being raised in a monastery, the desire to break free and explore the world, and coming back to the dharma after that. Whether you believe in reincarnation or not, you can sense that they are truly special beings. Maybe they didn’t choose this life, but listening to them how they learn to live it gracefully is inspiring. And isn’t that how we all struggle?

Today after this talk I broke the silence with my roommate. It was such an experience to listen to the lamas and we just HAD to discuss. For me to sustain complete silence I think it would be better to either be in a single room or to be in a dorm where there is social control/peer pressure. But it’s not like we are talking mindlessly about little nothings and it feels ok.

Day 7: about the meditations

I have to admit I had to get used to the Buddhist way of meditation. It starts with focus on the breath (so far so good), and then it moves into analytical meditation where a certain topic will be explored in detail. Topics can be the continuity of the mind, happiness, impermanence, suffering and many others. The memory of the one exercise where we had to visualise our own death will remain with me forever. I actually had a joyful experience, but when I opened my eyes 80% of the students were crying. Men and women! Never seen anything like this. If you want to know how powerful the mind can be, do this exercise.

The lectures are finished. Today we were just meditating morning till evening. My body felt fine; I sort of got used to the pain, if it even showed. I felt emotional. Things are surfacing that I haven’t thought about in a long time. I felt sadness about leaving. It’s been such an amazing week and the thought that it was almost over was hard to believe. To go back into the world after this… how can you ever convey what an experience it was, what it did to you?

Today after the morning meditation we were allowed to talk again. Oh. My. God. The noise was driving me insane. The energy in the group was high, everyone excited. I feel sad, I was actually quite comfortable being silent. I have a few conversations with my roommate and some deep one-to-one conversations with some other students. Even with being in silence some subgrouping has happened. You will always find your tribe – so much of our communication isn’t about speaking but it is body language and energy and that is very clear now.

We also get the news that the prime minister has made 500 and 1000 roupies notes invalid during our stay. We’re actually lucky as we missed the first week of it… It’s the ultimate test to see if you acquired some more zen during your retreat…

5 meditation apps tested for you